May 1940: Researching, Making Connections Across Time and Distance (and a Huge THANK YOU!!)

Time and again, I've been amazed at how much people around the world have been willing -- sometimes it seems like they are even delighted -- to help me with my research.

I've got friends in the knitting community who have helped me find things, translate stuff, you name it. I wrote to the grandson of my grandfather's commanding officer, and he bent over backwards to help. So did the residents of a tiny town in France where they were headquartered.  A few historians, a scientist, family ... the list goes on and on.

The newest one is that I looked up the address where my aunt was born (it was on her birth certificate 38 Rue Baron Lambert in Etterbeek/Brussels, Belgium), and found that today it's a small hospital - back then it was a maternity clinic, and I emailed them asking them when their building was built and whether it looks today what it looked like in 1940, and I got a response from the "Secrétariat de direction" which I think translates to "Executive Manager," and he confirmed a) the 1924 build date, b) that it used to be a maternité, and c) that it pretty much looks the same as it did in 1940. Here's a translation of what he wrote:

The Baron Lambert Hospital was built in 1924. The building is still in its original state.

Following mergers with other Brussels hospitals, it is now part of the Iris Sud Hospitals made up of the Etterbeek-Ixelles sites located in Ixelles, Molière Longchamp located in Forest, Joseph Bracops located in Anderlecht and the Baron Lambert site in Etterbeek.

The Baron Lambert site no longer has any care units. There is a large polyclinic on the ground floor and administrative services on the upper floors.

Here is the initial plan of the building:

And the current building: 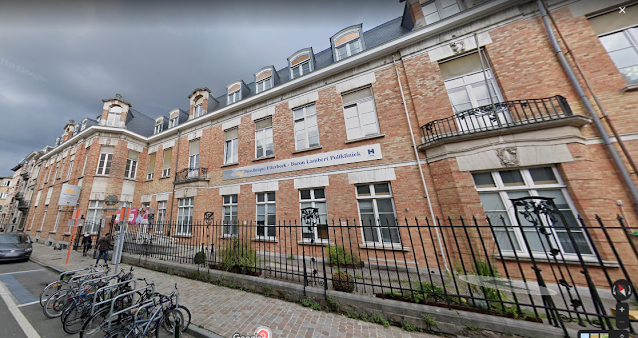 Hoping to have answered your request, I wish you much success in your search.
Best regards,
G---D----