May 10, 1940: Arthur visits his wife and newborn daughter during an invasion

My aunt was born on May 8, 1940 in Brussels, Belgium, at a maternité (maternity clinic).

On that rather fateful morning, he had to make his way from their apartment (pin 1) at 286 Avenue de Mai (Meilaan in Flemish) through the intersection of Tervueren Avenue and Saint-Michel Boulevard (pin 2), to the maternité at 38 Baron Lambert Street (pin 3) so that he could be with his wife and newborn daughter during the invasion. 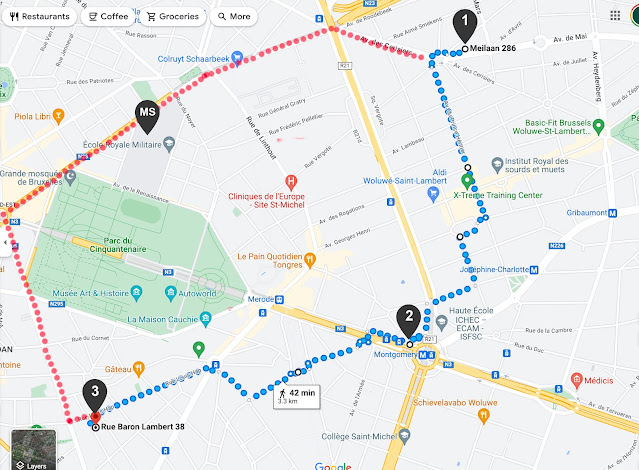 His story is both exciting, and rather dreadful.

Anyway, he awoke in his apartment on 286 Avenue de Mai (Meilaan in Flemish) the morning of May 10 at around 5:30 am to the sound of explosions and air raid sirens.  He was alone in his apartment, and his wife and baby were 2-3 kilometers away to the SW.

Here's how he told the story of making his way during an invasion, to his wife's side.

“What it is?—What is the matter?" I asked myself half awakened in my bed. A cannonade was heard outside. And suddenly a sorrowful widespread sound of sirens came to me. The sound was increasing during a few seconds and afterward it was fading to begin presently once more. Everyone can understand its dreadful meaning. Alarm! The birds of death are flying over the capital!

“Is the war there?" I asked myself anxiously. “Oh no!" Still I was fool enough to hope it was not true “Perhaps a squadron of R.A.F. is coming back from Germany and the Belgian army is shooting in a neutral manner, that is to say in trying to do no harm."

Here's what the outside of his apartment building looks like today (pin 1 on the map):

I don't know when this building was built - was this what it looked like during my grandparents' time, or if this is new since WW2? I do know my grandparents mentioned a 2nd-floor neighbor, so they either lived on the third floor or the ground floor.  In my stories, I've chosen for them to live on the third floor and their landlady to live on the ground floor. So if the building was there in their time, I can just imagine them sipping coffee at a little kitchen table in that little corner bay on the right on the top floor.
Here's an interactive Google Streetview map of where he was.  You can turn in a circle and see something like he would have seen, though without the mayhem and destruction.

Anyway, he rushed outside, and witnessed incendiary bombs dropping in the street, and the gruesome death (I'm guessing - it's not explicit) of a neighbor.

I got on as swiftly as I can. Five minutes later I was in the street.

I looked up, but could not discern at once the airplanes. However I was hearing the roar of their motors, somewhere far up.

And suddenly a whiz tore the air. It lasted not long, a few seconds perhaps. I looked eagerly and perceived four or five meters farther, in the middle of the pavement, a thing beaming like a piece of hot steel which just left a forge to be hammered by a blacksmith. Of cylindric shape, its diameter might have been 6 centimeters and its length of 30. At one end was fasten a fixed steel helix.

A hundred meters further another thing like this one fell and a neighbor was pouring a bucket of water on it. But instead of extinguishing it, big flames flashed from it.

I tried to imagine standing in the street outside that apartment, and seeing a neighbor engulfed in flames, and ... I just can't. He also describes how the most direct route (red dots on the map) to the maternité took him right by the military school ( École Royale Militaire - MS pin on the map) and he feared it might be a military target:

The maternity was situated half an hour of a walk from our home. The straight way passed aside of the Military School. I thought that perhaps this spot would be an aim for the enemy airplanes and I decided to take a long way round, through the outside Brussels’s boulevards. The airplanes could be always heard, somewhere far in the sky, too far to be seen at once!

There were few people in the streets. From time to time military motorcycles passed in a great hurry. The newspapers had not yet arrived to the stands in the boulevards. Some people impatiently waited for them. I remember somebody said: “I fear these gangsters may come till here." Nobody asked who were these gangsters ... the neighbor  violating the Belgium’s frontiers. Everybody knew it too well. Twice in our century they brought to Europe fire and blood, tears and death.

Then the newspaper stand at Tervueren and Saint-Michel (pin 2 on the map) was destroyed by a bomb, moments after he left it.

Without waiting for a newspaper I went on my way. I had just crossed the “avenue de Tervueren" and was perhaps two hundreds meters past this lane when suddenly a dreadful sound came to me: a mighty whiz increasing from second to second. After that, a strong wind made me run. A thought crossed my mind: “Why are you running?—Two meters further the danger is not smaller than here!"

So I tried to stop and I twined my head to see what happened behind me. A frightful sight struck my eyes. Above the trees of the boulevards hundreds bricks, clods, stones were flying in the air. A compact cloud of dust was rising to the sky. Something struck me. It was an old woman who fell into my arms. She was trembling. I tried to calm her. “That’s finished," I said, “the danger is over. The probability of two bombs falling near each other is not very big. There are no military aims here."

But I must acknowledge that I was shuddering. I was afraid like a child. All my will could not help me to shudder. And I went on in a hurry to see my wife and my baby. If I had left home two minutes later, or, if I had chatted two minutes more at the news-papers stand, I should be among the victims. My baby would never know her father.

He finally made it to the maternity clinic. He didn't say how long it took him to make the trip.

Here's the hospital. It was built in 1924, with another wing added in the early 1930s. Two other wings were added after the war.  What's cool is that it's still a hospital today, though it's a general-purpose hospital now and not specifically a maternity clinic.  Here's a Streetview link if you'd like to see the neighborhood.

I found my wife, of course a little upset, but still quieter than me. She knew already that the war burst but she did not see incendiary bombs dropped from the sky and did not feel the mighty blast of explosive bombs. “You will never return to our home at avenue de Mai, my dear," I said to her. “After a few days you will go down somewhere to the country to recover your strength and health and after that, we shall proceed to America."

But I must acknowledge that I was not quiet at all. To wait too long at the room of my wife and listen to the sirens and airplanes, without something to do, got on my nerves. So, as I met Miss Foulon, the director of the maternity, I asked her whether I might not be in some way useful.

And so half an hour later, arrayed from top to feet in a white surgeon cloth, I painted in blue the windows of the operation rooms. I was assisted by my brother who called on us in the maternity. Then we did many other works for the security of this house in which lay my wife and baby unable to move by themselves. Miss Foulon was very grateful to us and lunch and dinner was offered to us at my wife’s room and Mrs. Lubinski became the director’s and doctor’s pet.

One of the heartbreaking things about the Russian invasion of Ukraine, is that so many of the events of 80 years ago are happening again today, pretty much exactly as my grandfather described.  I very much wish people could learn from war, and y'know, not wage it.