So, it turns out that my grandfather's journal, that covers the events of May 8-11, 1940 (my Aunt Lilly's birth on May 8, and the Nazi invasion of western Europe on May 10 and the immediate aftermath), was written significantly after the fact, by about one to three years.

While he was living in Brussels, Belgium during the events depicted in the journal, he states in other sources that he actually wrote the story down after he'd escaped to southern France in the fall of 1941, during the winters of 1941-1943; so it was not a daily journal; rather it's a set of recollections that he wrote in an epistolary format.

Also, the cover of the journal gave a rather interesting clue.  He had to have purchased it after he arrived in France, because the cover of the journal is printed with pro-Vichy slogans, something likely only available in France, and not Belgium. Additionally, "Jeune France" was an organization created by the Vichy government in 1940, but was dissolved by 1942.  Hence, my grandfather had to have purchased it between the fall of 1941 and 1942.

But, why would he have had a Vichy-branded journal?   He was a foreign refugee who idolized Charles de Gaulle, and in no way supported the Vichy regime.  He even once described Pierre Laval (the Vichy prime minister) to me, as "the worst of all."

I can come up with three possibilities: 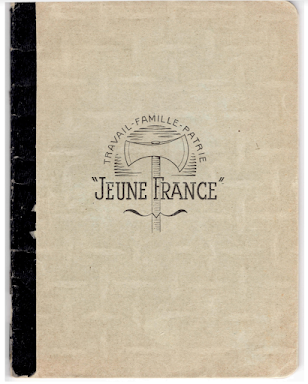 The slogan "Travail - Famille - Patrie" means "Work, Family, Homeland" and is the slogan that the Vichy regime used in place of "Liberté, Égalité, Fraternité" (Liberty, Equality, Brotherhood) which had been used since the French Revolution (as soon as Vichy was overturned, France re-adopted the original slogan, and it remains in use today).
As my friend said, "I guess the Vichy regime was not hypocrite enough to boast about freedom and equality."
La Jeune France was a political/cultural/propagandist movement began in 1940 by the Vichy government, and then dissolved in 1942.
If you want to know more, here are two wiki pages about it:
https://en.wikipedia.org/wiki/Travail,_famille,_patrie
https://en.wikipedia.org/wiki/La_jeune_France