So, I've run across some interesting challenges. Recorded history and testimonies often differ, both when they come from different people, but sometimes even from the same person but at different times.  Trying to figure out what the real story is can be really tricky.

In my grandfather's Yellow Pad Stories (written around 1974), he described it like this:

One lieutenant with three men on an advanced ridge did not start firing until the German column passed by and firing started between the Germans and us. Then he started his automatic rifle and hit the car which was following the first German column, killing the driver. The car rolled over many times from the road into the bed of the stream. Then Germans and we withdrew at about the same time, while the lieutenant and his secluded helpers kept firing at the Germans, who never knew that at that time they were many hundreds men against four. Later in the rocks of the mountain stream, inside the wrecked and soaked car, two bodies were found: the German driver and, beside him, the ... German commanding officer. In his handsome field leather bag, orders and information so precious to us were found.

Here's his description from his 1988 oral testimony:

Why, we [untrained civilians in the maquis] were some sort of a mob who didn’t know exactly what to do, or what not to do. We were firing haphazardly; they [French army non-commissioned officers] knew exactly what to do, and one of them very close to me, shot down with a rifle, the driver of a – I want to say jeep, but that is American ... this was a German vehicle, but let's call it jeep. And I think he hit the driver who lost control of the vehicle which fell into a stream below ... and no one survived. Well, because of this, the Germans withdrew and it was over.

Based on his description, I assumed the vehicle was a Volkswagon Kübelwagon. One of these: 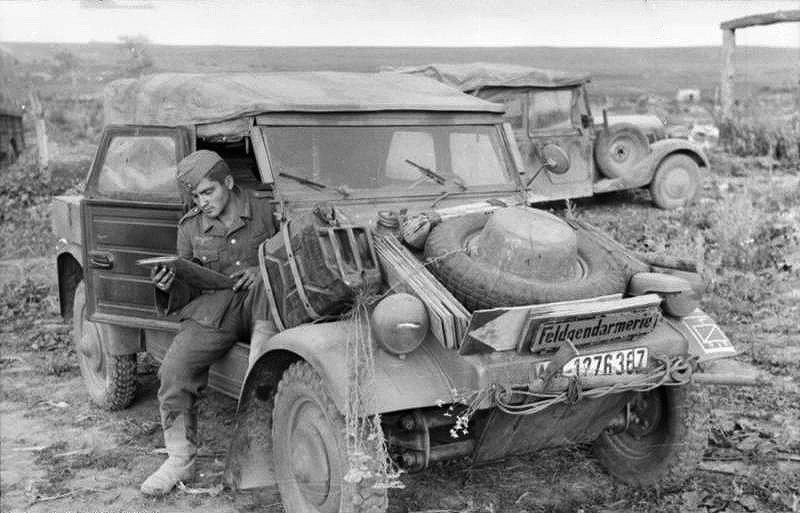 Here's a translation of an account written around 1955, by Michel Planas, the son of my grandfather's commanding officer, who also served in that unit:

The machine gun and the elements of the outpost go into action, repel the first attackers and overturn a light car (an 11 CV Citroën) which was advancing at high speed. The first engagement lasted a few minutes. The attackers fall back quickly taking their losses ... In the meantime, the disabled vehicle is inspected. It was the car of the Lt. Colonel who commanded the expedition. On the front seat, a briefcase containing plans and orders for the attack that we had stopped. On the translation of these, we discover a bewildering report, affirming that the Germans attacked OURCHES that day. After inspection of the new strategy, the Captain disperses the 3rd Section to the North of the positions of the first Section, on the hill which dominates the right bank. 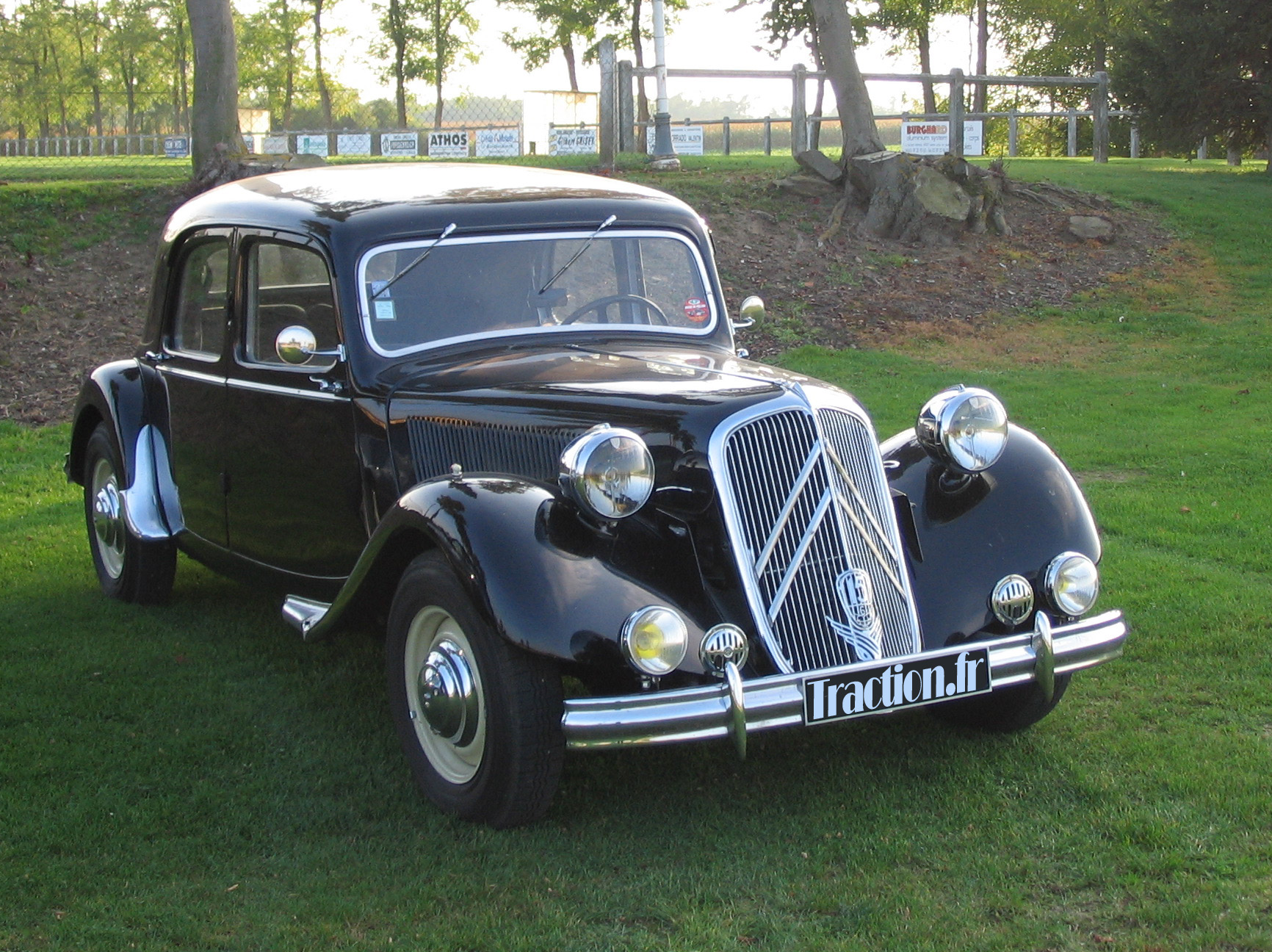 In this case, I tend to trust the other guy's account, for two reasons:
On the other hand, I think a Kübel seems more likely given the context. And why would my grandfather have called it a jeep, if it had been a Citroën?  And my grandfather was there, while I don't know if Michel Planas was.
Added:  I found what I think is yet another description of the same incident, in the 1978 book Tears of Glory: Heroes of Vercors, 1944 by Michael Pearson. The dates match up, and is part of the description of the same battle (La Rochette valley, the next valley over from where Grandpa was stationed).

The noise of the approaching column grew louder as the Maquisards waited beside the lane. Deliberately, they allowed the two motorcyclists at the head of the convoy to pass by them unchallenged.  Then they lobbed grenades at the first truck and the mountainside was devastated by noise. For a moment a sheet of flame concealed the vehicle. Then it was revealed, shattered into burning, smoking pieces. Everyone in it was killed -- including the commander of the column, as the Maquisards later learned.

In this account, it was a truck, they used grenades, and it exploded instead of rolling down the hillside. But the commander of the column was killed and they found out later, so I think it's probably the same event.
Story 2: The murder of my grandfather's landlady (who was also my aunt's babysitter):
In 1974, my grandfather wrote:

Sometime in June, while the 4th Company was still on Ourches, J- F-, one of us, went home without any authorization, got drunk and shot to death Mme. Auvergne. The Auvergnes were the owners of the old house in which my wife and child lived. She had a reputation being a friend of Germans. In fact she belonged to a family of collaborators, but the rumors of her having denounced the FFI’s (the home of one FFI has been burned by Germans who gave 5 minutes to this family to leave the house) were probably only gossip. She knew about me being in the Maquis and my wife has not been investigated. J- F-’s self-handed stupid act resulted in a real danger to many families of FFI, mostly to mine. In addition, inadvertently he shot also her niece, the father of which was a POW in Germany since 1940.
Captain Sanglier was very angry at J-. He was dispatched, under armed guard to the headquarters of Major Antoine. From now on J- served in a command of desperados, most of whom were killed in extremely dangerous missions, but he survived.

In 1988, he told me the story in much greater detail. Here's the transcript:

Yes, in our unit, our company was a man whose brain was not fully developed ... we say retarded.
And the Germans suspected that someone was in the maquis. And they were right. And they came to Beaumont-lès-Valence and burned the farm. And the whole village, the whole town was trying to guess who denounced them. How the Germans knew it?
Well, we lived in a home, you know this seventeenth century peasant home with no floor, with one tiny window. We lived over there. It belonged to the Auvergnes; Mr. and Mrs. Auvergne ... They were people from the right and they were … France was divided and they were for Vichy, for the government. Not for de Gaulle in London, but Vichy government which collaborated with Germans. And she was flirting with German officers, etc. And then came the suspicion that she denounced.
And my retarded friend, he came through the mountains, came from the mountains and shot down Mrs. Auvergne with a pistol. Killed her. And she was keeping in her hand, her niece, whose father was a prisoner of war in Germany.  And it’s a miracle that this was not Lillian because Lillian was supposed to stay with Madame Auvergne, but at the last moment, Mother left her with someone else. I don’t know what she did.
But in any event, almost Lillian was killed and the man returned to the Maquis. He came without permission, he killed someone without permission, and therefore as punishment, he was sent to a company whose duties were dangerous to such an extent that his probability of survival was very remote. And nevertheless he survived.
Madame Auvergne did not denounce these people. If she had, she would have denounced me. Roma would have suffered; the child ... It was not she. And after the war – he survived the war – after the war he had to go to a court and was accused of killing someone. And the gendarme – police – came to me, to ask what I knew about it. I said, “Madame Auvergne had wrong political ideas but she did not denounce. I wouldn’t be alive.”

Yet, here is how the company history records it:

Three tragic episodes disrupted the shaping of our Company: June 12, a member of the 3rd Section stole from Warrant Officer LABROSSE a Colt 45, a US Navy weapon, and went to shoot a milice volunteer in Beaumont.  Unfortunately, his lack of composure made him shoot down the wife and daughter of this sinister individual who came between our comrade and his target....

This is really interesting. It's written so very briefly, almost as if the writer wanted to report as few details as possible. He didn't mention the murderer's name, AND the murderer's name (as reported by my grandfather) is not included in the list of members at the end of the company history. It may not actually be the same incident, but the details are awfully close, and I suspect it's indeed one and the same.
What do the stories share?
How are they different?
In this case, I tend to trust my grandfather's account more. He knew the people involved whereas it seems like the other guy did not, that the account in the company archives is simply repeating second-hand details that were reported incorrectly to him in the first place.  And one further bit of info: My grandfather mentioned the man's actual name.  And the murderer's last name is the same as a local politician in one of the various towns where the 4th company was stationed. Could the murderer be related to the VIP? His son perhaps? That's exactly the kind of detail that might get left out of unofficial records like the one I read.
In any event, this is a bit like the game "telephone," being played through time, over nearly eight decades.
Posted by Cathy Weeks at 11:02 AM