When I was designing my BB-8 hat (which is STILL not ready for publication), I figured out how to do some pretty cool things with pompoms.  Like create stripes and layers, and even polka-dots.

It's surprisingly easy to do, but also kind of unintuitive, in part because it feels like you are doing it out of order.  Here's the trick:  You work from the top down for the first half, then from the bottom up, for the second half.  But .... I'm getting ahead of myself.

Notions:
Pom-pom maker (I like the Clover ones, and have them in ever size they offer), but a cardboard doughnut will work. Yarn in several colors, scissors.

Making Pompoms:
I'm assuming you know how to make them already.  If you don't, check out the pages below, and then make a couple of pompoms out of scrap yarn for practice.

Latitude:
Ok, the thing to remember is that the strands closest to the ties go around the "equator" and the strands farthest away from the ties form the "poles".   What that means is that the yarn color you wind first will become the pole, and you cover it up with yarn that becomes the equator.   You also need to account for the number of stripes - even numbers are easier to work with.  Half the yarn colors go on each half of the maker.  If you are using an odd number, finish each half with a thinner layer of the same color (it will form the middle stripe - the "tropics" as it were).

When you wrap, you will put your first layer down just in the center of the arc.  Then you cover that with the next layer, and fill in a little bit on either side (not shown is the green layer). Like this:


Here's a pretty ugly hand-drawn diagram that may also help:

Now, here's the hard part: When doing the first half, you work top down. When doing the second half you work bottom up. Now, this only matters, if you care about the stripe order. If the order doesn't matter, then just have some fun (and just remember to end both halves with a thinner stripe of the same color, if you have an odd number). If the order does matter, here's a guide for you, using rainbow order (Red-Orange-Yellow-Green-Indigo-Violet):


How thick do you make the stripes?
This will take some trial-and-error.   When I designed my BB-8 hat, I actually counted the wraps for several different sizes. But for this, just have some fun and be creative.   There are a few rules-of-thumb to remember, though:

In a fit of over-enthusiasm, I made a TWELVE-color pompom, six colors on each side: 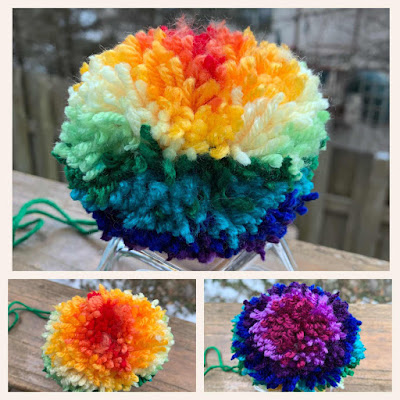 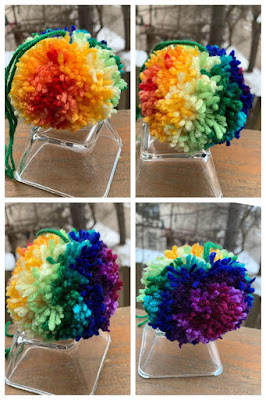 Longitude
To make longitudinal stripes, wrap an even layer all the way across the arc, and each color will cover the one below.  With these stripes you need to make the stripes in each half about the same thickness, and in the same order, otherwise the stripes will not match up along the meridians.   So, if you want a 4-color rainbow, wrap each layer all the way across, red, yellow, green, blue. Then flip the maker around, and red, yellow, green blue again.

Can you combine methods?  Yes!  Here's an example:

Other tips and tricks:

As for size, I have all of them.  But, if someone is getting just one, I'd advise getting the "large" set (65 and 85 mm; the middle image, below).  I use the 65 mm by far the most.  The biggest one is a blast, but it makes a pom-pom roughly the size of a newborn's head, and takes about 75 grams of yarn all by itself. If you are planning a hat with that one, you'll need an extra skein of yarn.

Ready for some polka-dots?  See Part II of my pompom series.
Posted by Cathy Weeks at 6:00 AM

Email ThisBlogThis!Share to TwitterShare to FacebookShare to Pinterest
Labels: pompom