1930: New Year's Eve at the Chantilly Jazz Club at the Hotel Terminus in Antwerp

So, yesterday, I wrote about how my grandparents went out partying on New Year's Eve. My grandfather recorded the exact date (December 31, 1930) and exact time (10:30 pm) and that they were going to the Chantilly after the photo was taken.

The romantic in me, sees the significance of my grandfather going to the trouble to recording the exact date and time and what they are going to do next. He didn't do that for any other photo, so it seems important somehow, like maybe ... he asked my grandmother to marry him when they were at the Chantilly, or something like that?

Or maybe he just recorded it because they were young (18 and 20) and it was a fun night for them.

Anyway, through the help of some friends, I've found out that the Chantilly was a jazz club in the Hotel Terminus on Pelikaanstraat in Antwerp. Friends found genealogy records of musicians who actually worked there in the 1930s.  And they found this old postcard that shows the hotel, and in the lower left, you can see the Chantilly (click to enlarge): 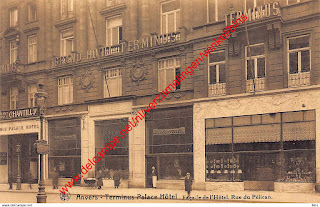 I "walked" up and down Pelikaanstraat (Pelican Street in English) in Google Maps using street view, and didn't find the building, though several of them looked sort of like it.

I did a few more searches and found the following page (it's written in Dutch/Flemish), with this image: 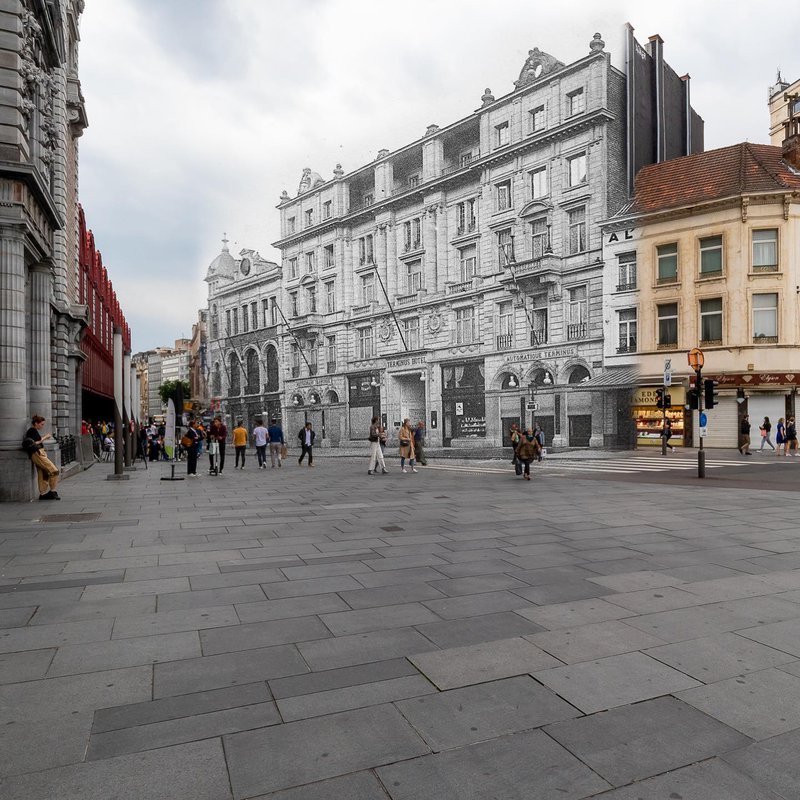 The text on the page says in English:

Another fine piece of work done by Antwerp, Wish You Were Here. It's great how the old photos are incorporated into the current street scene!
In the photo you see the former Grand Hotel Terminus in the Pelikaanstraat. This beautiful building was built in 1902 by Joseph Hertogs. The hotel was graced by luxurious interiors, dazzling banquet halls and majestic entrance halls. The clientele consisted of the then Antwerp bourgeoisie and wealthy tourists. Unfortunately, in the second half of the 20th century, this building too had to be demolished to make way for office buildings.
The Pelikaanstraat used to be a really prosperous street full of stately mansions. You also found a cigar factory and the presence of catering was evident here.

Alas, the building is gone.  But, there you have it: the jazz club my grandparents went out dancing on New Year's Eve in 1930.