The battered photo below was on the first page of my grandparents' photo album.  In December of 1930, my Grandpa Arthur was just 20 years old, and my Grandma Roma was 18.

My grandfather was born in Belgium, but grew up in Poland. His family went back to Belgium in 1927 so he could finish high school and attend the University.  My grandmother was born and raised in Poland, and they were childhood sweethearts.  Eventually, in 1931, my grandmother moved to Belgium where she too attended the university.

The front of the photo tells me a few interesting things:  My grandmother visited my grandfather in Belgium before she started at the University as a college student in the fall of 1931 (keep in mind that traveling from Łódź to Antwerp took two days by train in those days).  They look like they are dressed for a party, and my grandfather had a full head of hair (he had significant hair loss by 30 and was bald by the time I knew him).

Oh, and those look like martini glasses to me. 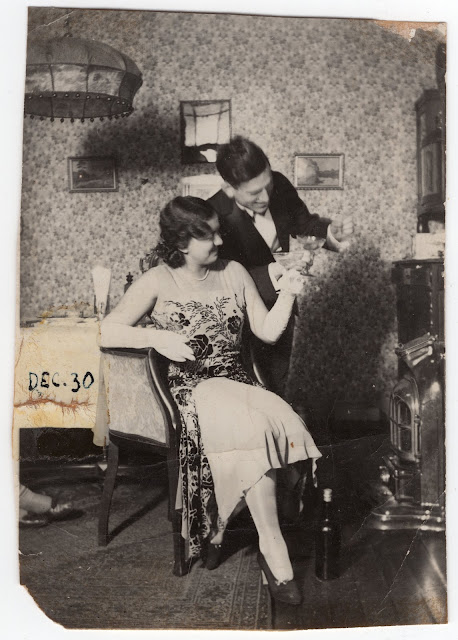 The back of the photo gives a bit more information: 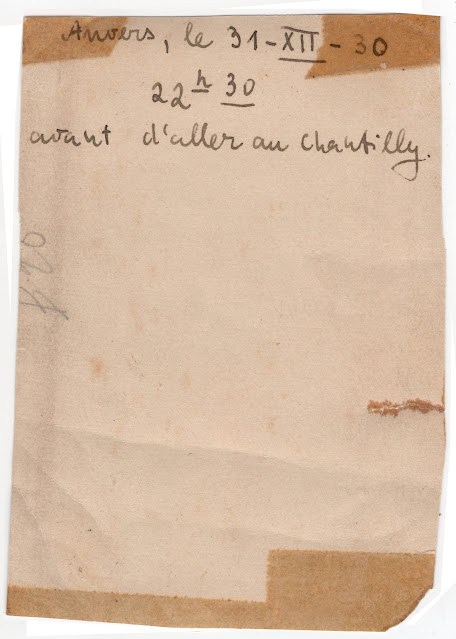 The photo was taken on December 31, 1930, in Antwerp (Anvers) Belgium. So it wasn't just any day in December; it was New Year's Eve.  And it was taken not just that evening, but at 10:30pm.  Google Translate told me the phrase "avant d’aller au Chantilly" meant "before going to the whipped cream," which doesn't make much sense (but is kind of funny). Then, I realized Chantilly was capitalized on the photograph, which indicates a proper noun.   As soon as I fixed that, Google Translate told me it meant "before going to Chantilly."
So, does that mean Chantilly, France or something else?  Chantilly was about 4 hours away from Antwerp by train and it seemed odd to be going there when they look as if they are dressed for partying rather than traveling.
A French friend came to the rescue and told me that if it were a city, it would be "á Chantilly". Because it's "au Chantilly" (which is literally translates as "the Chantilly") it strongly suggests a club or bar or restaurant.

Anyway, this event was important enough for my grandparents to record the city, and the exact date and time, and that it was before they later went to the Chantilly, an event which was itself meaningful enough to memorialize on the back. And when my grandparents escaped to France, they left pretty much everything behind, but this photo (and a few others) went with them.

I can't know the importance of the Chantilly, but I love the mystery, the idea of it, and that my grandparents were once young party-goers.