Finally, a mask that fits! 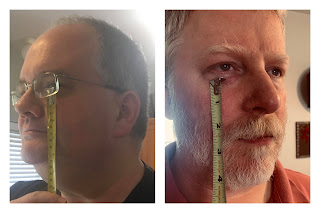 It's time to change gears to a different fiber art (sewing!)

I started out making a two-layered surgical-style mask with a pocket for additional filter material. But this style has some negatives - while they fit many faces, they don't everyone.

My husband in particular, found the surgical masks problematic:


While I'm a competent seamster (I've made a few nightgowns and dresses for my daughter when she was little, lots of halloween costumes, a couple of formal dresses, and even one pair of jeans) and can follow a pattern, I'm really pretty lost when it comes to modifying patterns or designing, and I really have difficulty understanding the 3D nature of covering a body with fabric. So what that meant, is that finding a mask that fit was going to involve a LOT of trial-and-error.

I tried some of the fitted styles that I found, but they ended up being even worse than the surgical-style for my husband (they were fine for many other people, though!). And I really wanted the mask to fit. Chris was totally onboard with mask wearing, but the best mask is the one that someone will wear consistently, and that means it must both fit properly and be comfortable.   But after the third mask pattern I tried still didn't solve the problems, I started asking around in the sewing groups on Ravelry, and lo-and-behold, someone gave me Carol Kimball's name and email.  And the rest is history. :-)

Carol had me take photos of my husband, showing certain angles and measurements. 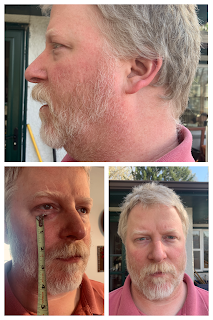 Next, she told me how to modify the mask she was testing, and we got it in the very first try. Chris has a long face and a rather narrow, pointed chin, so she had me lengthen the pattern, and then to gather the fabric, into a smaller area under the chin.  The new mask was comfortable, stayed out of his eyes, contained his chin even when he was speaking, and didn't dig into his ears at all. 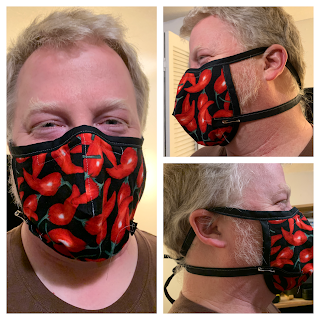 Then, I found out that a friend of mine, with a seriously large noggin was also having trouble finding masks that fit.  That friend happens to be a medical school professor, who was (and still is) combing through the medical literature, and posting his findings and commentary on FB (and urging people to wear masks). So, I offered to make him a mask. He sent along the same type of pics:

Carol told me what modifications to make - lengthen it it to fit (as I had with Chris's), and because James has a fuller chin, to spread the gathers out over a wider area, and much to my surprise, his fit perfectly on the first try, too.  Carol knows her stuff!  Here's the working-muslin I made him (note the lower strap was still pinned - once he adjusted the straps to an appropriate length, he sent me the measurements, and then sewed the lower strap-end himself). 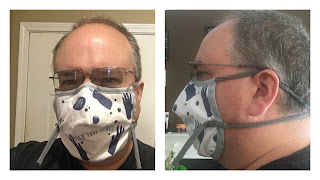 It's not shown, but I then made him a finished mask out of a fabric printed with images of the COVID19 virus. When I sent him the finished mask, I also sent him his bespoke pattern, so he could have more made if he wished.  He happened to be wearing that mask when he was interviewed by his local TV station, which you see in this video. It shows him wearing it properly at about 0:58 seconds into the video, though he pulled it down for the actual interview (which was filmed from an appropriate social distance!).

Anyway, I was delighted to be part of the testing (if only to test it for a couple of edge cases).  So many thanks to Carol and her testers who welcomed me into their group.

You can find the mask pattern here: The Kimball Mask.